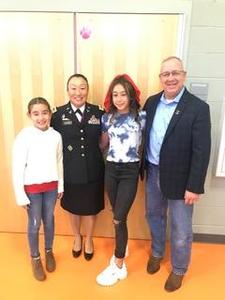 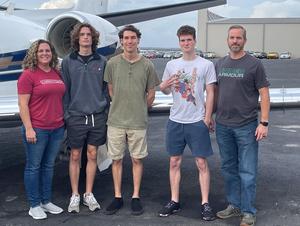 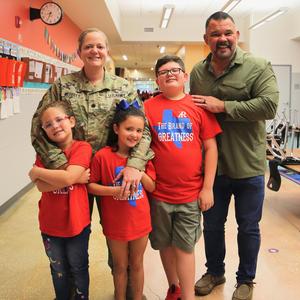 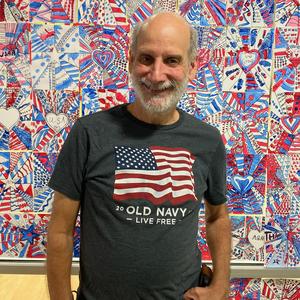 On this Veterans Day 2022, students proudly waved the red, white and blue in heartwarming ceremonies hosted by each Comal ISD campus to honor those who serve and have served in the United States Armed Forces.

Nov. 11, 2022 - Student talent was on full display today throughout the Comal Independent School District as students, teachers and staff members honored family and community members who serve or have served in the United State Armed Forces.

Each of Comal ISD’s 32 campuses paid tribute on this Veterans Day to those whose service stands for courage, bravery and sacrifice. Here are just a few of the men and women who were among those being honored today, their military journeys and what it means to them to be honored.

Deployments: Three times to Afghanistan with last deployment from 2018 to 2019. At the time, her daughters were in fourth and seventh grades, and it was her most difficult deployment.

“I missed quite a few milestones in my daughters’ lives,” Chabot says, “and it was then that I knew I had to retire and focus on my family.”

Military Service: Chabot comes from a military family. Her father is retired from the Air Force and two of her brothers served, on in the Army and one in the Air Force.

“The Army treated me very well,” she says, “letting me travel the world from Somalia, Italy and Germany to Bosnia, Hawaii and Japan, just to name a few of the places I’ve seen.”

Continued Service: Since she retired, Chabot has looked for ways to continue to serve, and today, she serves her community. She is a substitute teacher for Comal ISD and currently serves as the president of the DMS PTSA. In addition, she supports fellow veterans through Soldiers Angels which helps veterans who are in need and she helps with care packages for service members who are away from home for the holidays.

“I had to watch other people take care of my kids when I was deployed,” she says. “I decided to volunteer to give back to all of them.”

She is honored to be recognized for her military service and enjoys telling others about her experiences.

Military Service: Both have family members who served in the military during Vietnam and World War II.

“I joined the miliary as a way to see the world and serve my country at the same time,” says Maria who found herself living in Korea and Italy during her and Matt’s military careers. “I appreciate that Comal ISD recognizes veterans and their families each year. The students of veterans tend to move a lot, and it’s nice to honor them too because they sacrifice a lot and we don’t always acknowledge them.”

Matt was a combat engineer whose military career ended when he was severely injured in Afghanistan on Oct. 13, 2007. He earned a Purple Heart, two Bronze Stars, a parachutist badge with bronze star, an air assault badge and a German parachutist badge.

“I think it is important that we continue to honor those who serve,” says Matt.

“I initially entered the military to serve my four years and get out,” says Merritt. “Within those first four years, I was deployed for 18 months. Those 18 months changed my life. Saving the lives my military brothers and sisters gave me a new perspective on life. It changed my goals. I wanted to take care of those that have sacrificed everything.”

“I feel that the Veterans Day program at Kinder Ranch keeps the service members in the forefront,” Merritt says. “While often in today’s environment, those that serve are not cared about and not valued, KRES is celebrating them, both past and present. There is an abundance of military personnel in San Antonio, and it is nice to honor them.”

“I am very honored to see the time and trouble that everyone goes through to honor those who have served,” says Silivanch, who works in the technology department in Comal ISD. I enjoy seeing all the flags that line elementary schools like Specht. It is a real honor and a riveting spectacle.”

Thank you to all our community veterans.

-Maria and Matt Miles and family