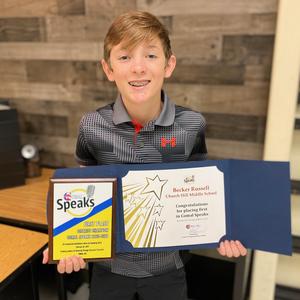 This year's Comal Speaks champion isn't afraid to speak his mind and encourages his peers to do the same, because what they have to say matters.

April 9, 2021 - An eighth-grade student from Church Hill Middle School won the Fourth Annual Comal Speaks competition for the Comal Independent School District recently. A self-described performer who isn’t afraid to speak his mind, this year’s champion was among the top 14 middle school students in the district to compete in the virtual final round on March 2.

“It was a little weird to compete through a computer,” said Becker Russell, 14, “but to me, speaking is just speaking. If it is a computer or a thousand people, you just have to think of it as speaking to one of your best friends. That’s how I think of it.”

Russell was among 14 middle school students to compete for the championship title. Representing their middle schools, the sixth through eighth grade competitors were each given topics related to Comal Commitment character traits, which consist of responsibility, respect, judgment, honesty, integrity, courtesy, confidence, teamwork, empathy and perseverance.

Russell chose to talk about empathy, specifically, “how do you show empathy and name a time when you showed empathy.” He shared about a time when he and his family stopped to help someone they saw sleeping in a tent on the side of the road on a very cold day. That one stop turned into his very own service-based group named “Kids Who Kare,” and ultimately raised money to purchase blankets, pillows and sleeping bags for those in need.

“It made me feel really good to help others,” Russell recalled, and he hopes to continue to be of service to those in his community.

He also encourages other students to express themselves whether it be through sports, theatre, music, dance or speaking.